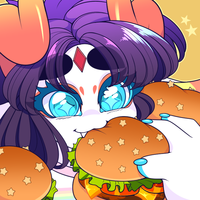 Welcome to the Dragon's Horde

Species Info: Space Dragons, like their current namesake, are an alien dragon race that are mostly of various Eastern Dragon descent. (Some inherit traits from more western like dragons; a rare gene.) It's possible they carry traits of other more mammalian like animals but their dragon like characteristics are the most dominant. It's unknown how many types of Space Dragons exist, there's believed to be 9 types since the entire species considers 9 to be their lucky number.

The Draco Constellation consists of 19 known planets which serves as the many home worlds
this species can come from. Eltanin is considered their main/popular planet.

Space Dragons are born from crystal like eggs believed to have been formed from random particles in their atmosphere or "the tears of stars." Once matured, they develop a unique furry scale coat which is soft to the touch. Their forehead gems are hard but can still crack with enough pressure/force. It's unknown what happens if it's terribly damaged or removed. The markings on their face & chest are universal, meaning every single Space Dragon Has them UNLESS they have a slime gene. In the Slime gene case, they only have markings on their face since their chest & stomach are made of jello like material.

How to Obtain a Space Dragon:
Questions About the Species:
Powered by